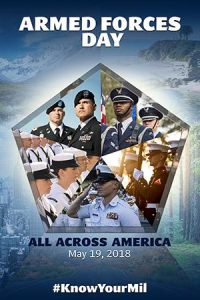 On the third Saturday of every May, the United States of America celebrates Armed Forces Day. Since the holiday was created back in 1949, it has been a day to celebrate not just one or two of our military branches, but all of them together.

Unlike Veterans Day, which is November 11 every year, Armed Forces Day gears itself to celebrating the men and women still active in the service of our country. It is also a day to teach our children exactly how the military serves us in our daily lives.

It has become a day on which the officers and enlisted men and women can show off their state-of-the-art airplanes, weaponry, armor and other technology.

Throughout the years, each Armed Forces Day has followed a theme. The first one, back in 1950, was “Teamed Up For Defense,” which celebrated every branch of the military together for the first time. Since then, the themes have varied, including the noble concepts of “liberty” and “patriotism,” or more nuanced ideas such as “Freedom Through Unity.”

This Armed Forces Day, which falls on Saturday, May 19, 2018, the theme is “All Across America.” An official Twitter hashtag will accompany Armed Forces Day this year, #KnowYourMil.

The social media hashtag, which became an official initiative for the United States Department of Defense in January, was introduced to teach civilians about the military — and more importantly, the people who serve in the military.

The Department of Defense seems to feel that civilians see the military as a “lethal fighting force” and not much more. The truth is that the job encompasses so much more.

What can we do to change the perception in our own minds and the minds of our children and families? First, we can get more information on the different branches of the military. Air Force, Army, Marine Corps and Navy are usually the first to come to mind. Less likely to be automatically recalled are the Coast Guard, the Merchant Marines and the Army National Guard. 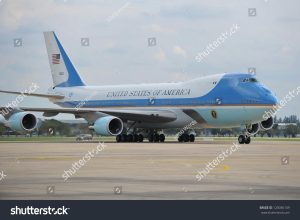 Our men and women of the sky, the Air Force, lives high above the ground. This branch of the military specializes in any travel, cargo or rescue that might require assistance from above. The Air Force also tends to create the most astronauts and other space explorers, from the scientists on the ground to the men and women living in the International Space Station.

If you’re already in the area, the National Museum of the United States Air Force near Dayton, Ohio would be a perfect place to take the kids. This year, the last day of the Memphis Belle exhibit falls on Armed Forces Day, showcasing the World War II heavy bomber that completed 25 missions before being decommissioned. After the event, the Memphis Belle will reside at the museum permanently.

If you’re unable to travel to Ohio, don’t fret. There are still plenty of air-themed crafts you can do at home. For younger children, you could print out free airplane coloring pages. While coloring, discuss what Air Force One’s purpose is: protecting the president. Scholastic News is a great place to find information geared toward growing little brains.

Another fun STEM (science, technology, engineering, math) themed craft for kids of all ages is creating a Balloon Hovercraft. All this craft requires is a couple old CDs, some glue, balloons and a few water bottle lids — and you can turn the science of air travel into something the family can literally hold in their hands.

The army is the bread and butter of the military; they are the soldiers that come to mind when someone utters the word “military.” Much more than just ground troops, however, the army employs some of the most scientific- and engineering-minded individuals in the United States. Their primary purpose is keeping us safe, both inside and outside our country’s borders.

The National Museum of the United States Army isn’t quite ready to open yet. However, they do offer an “online museum” during construction. The museum dedicates this virtual experience to the Vietnam War, with pages filled by pictures and stories beginning as soon as the United States touched down in Vietnam.

A more hands-on option would be to craft paper models of United States Army military vehicles. At a scale of 250 times smaller than the real vehicles, these are a perfect addition to anyone’s model car set, and you can make them at home.

The Navy is the United States aquatic force, which covers a broad spectrum of operations. For instance, their fantastically trained Blue Angels and other air teams specialize in flying to and from carrier ships located in the ocean. Any submarines or other oceanic vessels usually belong to the Navy as well.

The United States Navy has many official museums across the country, some located in Illinois, Virginia and Florida. These museums showcase everything about the ever-adaptable Navy, from their aviation sector to submarines to the United States Naval Academy.

During peace times, the Merchant Marines are a fleet of ships that carry goods to and from the country, not unlike non-military merchant vessels. During times of war or trouble, however, they are frequently used to deliver troops or arms.

The United States Merchant Marines have a museum dedicated to them, just as every other branch does. Although the Merchant Marines — and everyone else, really — always prefer peace to war, their contributions to our safety are no less significant than any other soldier or sailor. Located in Kings Point, New York, the museum is ready for your visit on Armed Forces Day.

If you can’t get to New York, Armed Forces Day would be the perfect time to explore what it might mean to be on a merchant ship. You can create a fleet of ships with construction paper and paper towel rolls, or spark the imagination by telling or writing a story as a family about the crew of the flagship.

The United States Marine Corps, on the other hand, is a specially trained force that deals with “amphibious operations,” or tasks that take place both in and out of the water.

This year, the National Museum of the Marine Corps, located in Triangle Virginia, will showcase “History in Your Hands” — an exhibit specially designed for those who are blind or visually impaired — the Sunday after Armed Forces Day. Along with their many other permanent exhibits, it makes a fun adventure for any family.

There are plenty of activities to do with the kids and family that incorporate themes of the United States military. You could learn the military alphabet or how to correctly fold and care for the American Flag — just be careful to not let it touch the ground. Luckily, there are a ton of ways to celebrate the day in a meaningful way.

Restoration Update as of April 2018

Warning: Use of undefined constant taxonomy - assumed 'taxonomy' (this will throw an Error in a future version of PHP) in /home/museumq1/public_html/wp-content/themes/eduma-child/functions.php on line 93

Warning: Use of undefined constant title_li - assumed 'title_li' (this will throw an Error in a future version of PHP) in /home/museumq1/public_html/wp-content/themes/eduma-child/functions.php on line 94