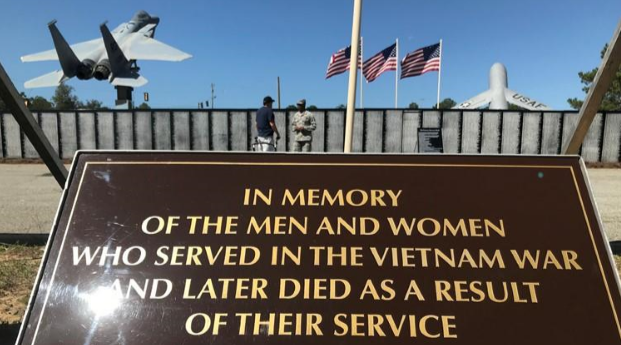 The traveling replica of the Vietnam Memorial in D.C. has all 58,311 names of the men and women who died in the Vietnam War etched on it.

WARNER ROBINS, Ga. — The traveling Vietnam Veterans Memorial wall is making a stop at the Museum of Aviation in Warner Robins until Saturday.
The replica of the wall in Washington D.C. travels all over the U.S. and pays tribute to the men and women who died in the Vietnam War.
There are 58,311 names carved into the wall, the same as the one in
D.C..
When Jeffrey Frank heard the traveling wall was coming to town, he jumped at the chance to see it.
“I told my wife — I woke up this morning, I said, ‘See ya, honey. I’m going to the wall,'” he said, laughing.
Frank served in Vietnam from 1969 to 1970.
I didn’t want to go to Vietnam fighting in the jungle, so I said, ‘I’ll join the Navy and watch it through binoculars,'” Frank said.
Like 33,000 of those names on the wall, he was only 18 when he started working as a rescue air crewman.
“Just about everybody is less than 22. There’s five 16-year-olds on there. When you look at it and you go, ‘Wow. That’s just young, young people just
getting started, didn’t know nothing,’ It’s kinda hard. It’s kinda sad,” Frank said.
He just got back from visiting the real wall in D.C., and he said the traveling wall gives people who can’t get up there a chance to have the same aweinspiring feeling he had.
“There’s not a dry eye there. You know, it’s pretty awesome. This is close. It keeps you in touch,” he said.
Richard Russo is the wall manager. He said they have traveled to about 18 cities every year since 2006, and seeing visitors’ reactions is something that never gets old.
“It’s closure. It’s the first step in the healing process for somebody that’s been carrying something around for 50-plus years,” said Russo.

He said it took him and his team of volunteers two-and-a-half hours to set up the football field-length wall, and they will start taking it down Saturday at 3 p.m.
They keep the wall open 24 hours a day so people who want to mourn at the exact moment they lost someone have the opportunity.
“That guy will come out here at 2:35 in the morning, smoke a cigarette and kick back with a Budweiser, and have a beer with his buddy. It’s not unusual to show up here in the morning and see a beer can sitting by the wall, and as soon as you see it, you know why it’s there,” he said.
Russo said he’s lost count of how many have come to the wall looking for someone they never even had the chance to meet.
“Young ladies — not little girls anymore — come to see a dad they never met. “That’s why we do what we do,” said Russo.
The oldest person on the wall was 63, and Russo said the youngest was only 15 years old. He said he submitted the paperwork and said he was 21 so he would be able to serve.
Frank says whether it’s in D.C. or Warner Robins, it’s good to see the names of some of the friends he lost.
“It brings a tear to your eye and makes you think of all the good times that you had with them,” he said.