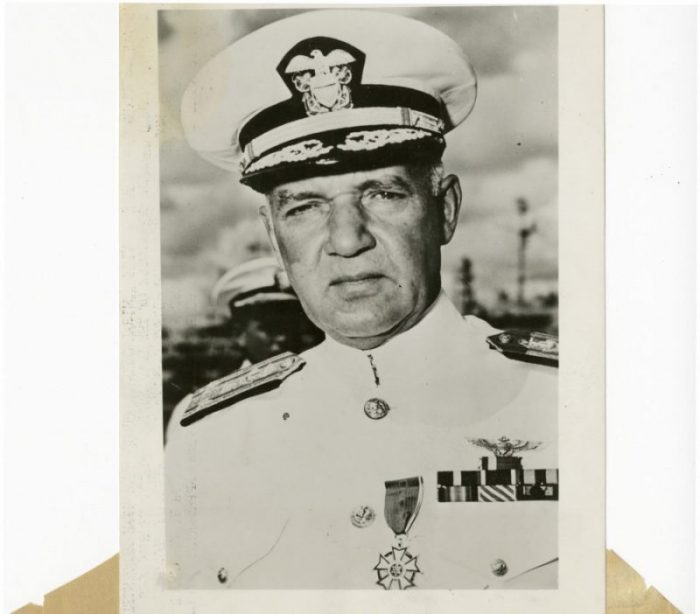 May 8th, 2019 is the 100th anniversary of the First Flight Across the Atlantic Ocean accomplished by the US Navy with Admiral John H.Towers (commander at the time) one our famous inductees into the Georgia Aviation Hall of Fame in 2004.   In honor of this epoch event there will be a ceremony at Rockaway, LI, NY where the original departure was.  This was known as the Flight of the Three NC Flying Boats.  The flight was conceived by John H. Towers with Glenn Curtiss in 1915, but they had to wait until after WW1 to accomplish the goal.  Towers not only conceived of the idea, but he organized, chose the participants, and commanded the flight of the three NC ships.

Due to inclement weather at the destination in the Azores only one of the three made it, but it was the very first crossing of the Atlantic by airplane.

What was so unusual about the flight was the NC3 which Towers was on was the flagship airplane.  They were forced down 100 miles short of the Azores, but Towers successfully sailed the plane by water to the destination.  When he was ready to change the flagship from NC3 to NC4, Josephus Daniels secretary of the Navy at the time, would not allow Towers on the other plane.  This interference of change of flagship had never been done before and since.  Every admiral in the Navy tried to explain to Daniels this is not done.  The agreement was a change of flagship, but he would not budge.  Daniels later regretted his decision and gave medals to all the participants of the flight.   HE should not have interfered with Navy protocol he said.

The success of the First Across was really instrumental in changing the psychology of the US way of thinking.  We thought we were invincible because we had two oceans on both sides of us.  The accomplishment was a huge awakening that we are vulnerable in the future.

Charles Lindbergh was the 28th person to cross the Atlantic.  He acknowledged what Towers and group did was much more difficult than what he did.  It had never been done before.  Navigation and weather were all experimental.  Airplane instruments were experimental.  The radio was experimental. Towers and Lindbergh were always very close friends.

He became an international celebrity after Crossing the Atlantic. The small Rome, Georgia  airport being renamed Towers Airport.   After this accomplishment he became the recognized leader of Naval Aviation vs. the battleship Navy.

Towers was head of Naval Aviation in the teens as a lieutenant because nobody else wanted to do it.  They all claimed it was a dead end street because of the resistance of the battleship admirals or the black shoes.  He created Pensacola Naval Air Station PNS the Valhalla of all navy pilots in 1914.  Towers created flight pay for aviators which was unheard of.  He created the gold Navy Wings Pin which is the highest honor of a Naval Aviator.  All Navy pilots should be thanking him for extra the money…!

Towers went on to become the very first 4 star in the Navy coming up through aviation.  He became head of the Bureau of Aeronautics, the most influential bureau in Washington before the war in 1938 and the first year of the war.  His policies created the build up of the Navy inventory from 2000 airplanes to 39,000 airplanes along with the pilots to fly them and the mechanics to maintain them.  Towers had at one time 1.5 million servicemen under his command.   He also created the landing fields and Navy Auxiliary Fields all over Georgia.  He created PDK airport as NAS Atlanta, NAS Athens, the Rome Airport (now called Towers Field), many military training fields in the south.  NAS JAX is also called Towers Field..

He created the Navy ROTC programs for pilot training, the Hollywood war movies to inspire inductees into Naval Aviation, the Women’s W.A.V.E.S. program and created women opportunities for officer positions….There were no women officers before Towers started the program.   The secretary of the Navy at the time, Admiral Ernest King, would never allow a woman to take aviation training.  Towers fought for women to fly, but was not successful.  The US Army Air Corps was very successful with the WACs.

Before the war FDR approached Towers and his counter part in the Army Air Corps, General Hap Arnold, to supply airplanes to Winston Churchill in his Lend Lease Act.   This was done with difficulty because both were trying to build up their inventory of aviation equipment for the US involvement in the war.

Towers later was transferred to the Pacific and was just under Admiral Chester Nimitz.  He was one of the first to create the island hopping concept which became the adopted strategy.  He straighten out the chain of supplies in the Pacific for the Marines and Navy which became a big deal. Supplies were sitting all over the US in train cars for months until he got involved.

He was given the command of the large task Force to attack Japan called Operation Olympic, but the Atomic Bomb was dropped and the war ended.   WW2 was the crowning moment for Naval Aviation with the aircraft carrier becoming the queen of the fleet replacing the battleship.

After the war he became the first C.I.N.P.A.C  position working with Macarthur and against the communists in Korea and China.  He retired in 1947.  But, one of his accomplishments was when Secretary of Navy and Secretary of Defense James Forrestal  asked Towers for a special committee to save Naval Aviation and not let it morph into the newly formed Air Force.  The congress and the several others thought you could put airplanes all under one roof.  The Navy objected to this when General Billy Mitchell tried it in 1925 and were trying to do it again.

The committee comprised of Generals Omar Bradley, Touhy Spatz, and Towers.  They came up with the formula Navy Aviation would continue, but only the Air Force would carry nuclear weapons.

He also was the very first military person to obtain 4 stars in the state of Georgia in any of the military branches.  Apollo 17 named a crater on the moon for him.

When we realize that hundreds of airplanes cross the Atlantic every day, it was only 100 years ago this month when the first airplane successfully did it! And, we can claim John Henry Towers as a Georgia boy!!

Message from the President & CEO

Helicopter Landing at the Museum