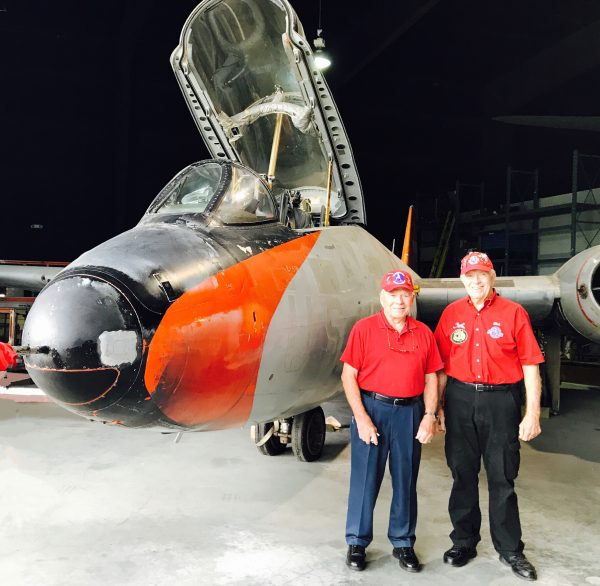 On Thursday October 25th, veterans who flew the B-57 Canberra visited the Museum of Aviation to see up close the Museum’s B-57.

Robert Koehne was a B-57 navigator and is the current president of the 13th Bomb Squadron Association. The 13th Bomb Squadron flew B-57s during the Vietnam War and is today a B-2 Spirit stealth bomber unit. Koehne retired from the USAF as a colonel and flew at least one mission in the Museum’s Canberra.

Robert Butterfield was a B-57 pilot during the Vietnam War. On May 13, 1966, he flew the Museum’s B-57 on a night attack mission that resulted in the destruction of an enemy bridge and a truck and trailer. Butterfield also retired from the USAF as a colonel.

Koehne, Butterfield, and others visited the Museum of Aviation after attending a 13th Bomb Squadron Association reunion in Savannah.

The B-57 Canberra was a fast, capable jet bomber. The Museum of Aviation’s B-57B was flown on combat missions for two and a half years during the Vietnam War. The Museum’s B-57B is awaiting repainting, and is not currently on public display.