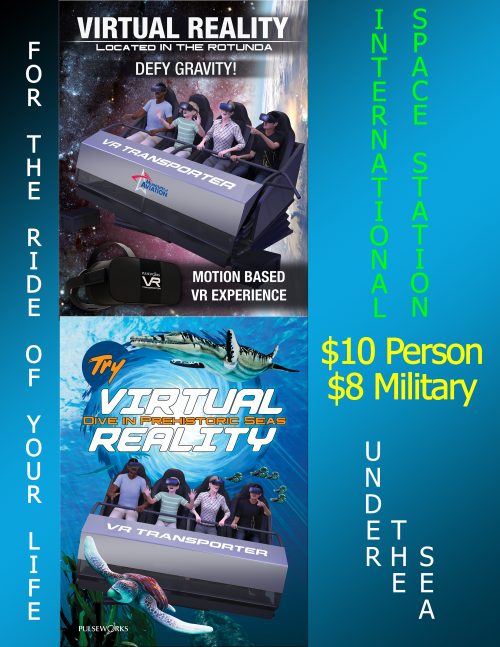 Starting Saturday October 6, visitors to the Museum of Aviation can experience the thrill of leaving Earth or having an adventure under the sea, without actually leaving the museum, thanks to an exciting new motion-based virtual reality (VR) attraction in the museum’s Eagle Building. Through partnership between the Museum of Aviation and Pulseworks, LLC—an Atlanta-based provider of motion-based entertainment and digital content—museum visitors can now enjoy cutting edge VR technology!

The attraction will utilize an innovative new motion-based ride called the Pulseworks VR Transporter, one of the first of its kind in North America. It will feature an eye-popping, first-person adventure entitled Spacewalk VR: Danger in Orbit, letting patrons assume the role of an astronaut testing a new manned-maneuvering unit as they explore the elaborate the exterior of the International Space Station high above Earth. Individuals will also have the option to be “transported” back in time and glimpse amazing marine life of the distant past through a second  adventure entitled Prehistoric Dive VR.

Virtual Reality is the amazing technology that enables people to have an immersive presence in a digital world. It uses high-tech head-mounted displays to connect users directly with content inside a three-dimensional space. Rather than simply watching a movie, users can change their perspective, explore, and have their own unique experience tailored to their head movement. The VR Transporter takes VR to a whole new level! While VR Technology mimics the immersive visuals of the real world, Pulseworks motion and effects technology reconfirms what wearers are seeing by providing input to their other senses! Dynamic motion provides important cues to the brain that they are really travelling, and stunning surround-sound audio and gripping 4D-effects heighten feelings of realism.

The VR Transporter accommodates up to four people per ride cycle. The motion platform elevates, pitches, and rolls in computer-controlled increments designed to mimic the path of the would-be astronauts as they float in space on their extravehicular (EVA) journey from the cargo bay of the Space Shuttle Discovery to the International Space Station. It also allows people to go underwater to explore a mysterious prehistoric ocean, meeting creatures such as a massive Archelon sea turtle, a graceful long-necked Styxosaurus, a powerful Ginsu Shark and coming face-to-face with monstrous Megalodons!

The effect of the VR Transporter is so powerful that many guests will try to reach out and touch objects as they pass by. It is this intuitive reaction that makes the platform such an obvious tool for learning and adventure at the Museum of Aviation, where many come to ponder dreams of flight, space, water, and adventure. The Museum of Aviation is only the second location in the state of Georgia to receive this amazing technology.

“The VR Transporter offers a ‘wow’ moment for museum visitors unlike any other, and will allow guests to imagine themselves in almost any space or aviation scenario,” said Raj Deshpande, CEO of Pulseworks. “We are happy to offer this leading-edge technology and begin our partnership with the Museum of Aviation to further the educational and interactive goals of the Museum.”

Tickets for the VR Transporter ride may be purchased at the VR Transporter in the rotunda on the first floor of the Eagle Building, or in the Museum Gift Shop. The VR Transporter will be open during all operating hours of the Museum—9:00 a.m. – 5:00 p.m. Monday through Sunday. The Museum of Aviation is located adjacent to Robins Air Force Base at 1942 Heritage Blvd. in Warner Robins, Georgia.

Pulseworks is headquartered in Atlanta, Georgia where it manufactures and develops a myriad of motion simulator products and immersive content for its owned and operated attractions across North America. Founded in 1998, Pulseworks has partnered for over 20 years with prestigious institutions like the Field Museum, Space Center Houston, Smithsonian National Air & Space Museum, and the National Museum of the US Air Force among many others to provide patrons with exciting and immersive motion-based simulation experiences.