Four years ago, I visited the Museum of Aviation for the first time. I heard on the news that the museum needed volunteers. I knew little about airplanes, but as a former American history teacher, I figured the museum would be a good place for me to learn more about our history. Little did I know that I was about to begin a wonderful journey into the past that would bring me great joy.

After a few months volunteering at the front desk in Hangar One, I went to work in the archives with curator Mike Rowland and museum collections manager Bill Paul. Each day was filled with stories of brave men and women who fought for our country. And, of course, there were the planes, vehicles and other pieces of history all around the museum itself. Almost all of the planes there have a connection in some way to Robins Air Force Base, so I learned more about the base and the important work that is done there.

The next year I became a writer for The Sun News and began what was to be a series of about 40 articles sharing with you, the reader, stories behind the aircraft, exhibits and people that I had discovered. It has been a pleasure.

Now my journey has taken another turn and I will not be writing my monthly columns.

As I reflect on my columns, I think about my favorite stories that I had the honor of sharing with you. My first article was on our C-123 Provider, which flew on many missions in Vietnam and sprayed Agent Orange. Other aircraft I wrote about include the C-130 Hercules, C-141 Starlifter, the U-2, F-86 Sabre, B-29 Superfortress and the Pave Low MH-53 helicopter, just to name a few. Of all the planes I wrote about, I loved the stories of the glider pilots in World War II the most. To me, flying in what amounted to a wooden crate behind enemy lines without much weaponry seemed crazy yet very brave.

I really liked learning about the planes, but it was the stories of the heroes that made the research and writing worthwhile. There was Jesse L. Brown, who was the first African-American naval officer to die in the Korean War. There was Georgian Hillard A. Wilbanks, who received the Medal of Honor posthumously and who died a hero in Vietnam by covering a group of Rangers about to be ambushed.

Serving in World War II, Rocky Gause was another Georgian worthy of celebrating. His story began in the Philippines, where he was captured by the Japanese. He and a fellow officer escaped and commandeered a fishing boat. They went from the islands all the way to Australia in 159 days without being caught. After all of that he died only a short time later in a plane crash in England.

There were women, too, whose stories were so inspiring. The women who served in Vietnam were air traffic controllers, intelligence officers, communication specialists and in many other positions supporting our troops. The majority of women there were nurses, the ones who provided much of the care and held the hands of the dying and who promised the soldier hope even where there was none.

Then there were the women who dared to fly in a time when women weren’t supposed to. Bessie Coleman was called the “Mother of Flying” for people of color. Her story was one of great adventure and great risk. Bessie Coleman did very difficult stunts and parachute jumps out of biplanes in the 1920s. She was killed in a plane accident.

Two women who had ties to Georgia were Hazel Raines and Jackie Cochran. Both were WASPs in World War II. Raines was the first woman in Georgia to receive a pilot’s license. With Cochran, well, there wasn’t much Cochran did not do for women pilots. She broke more world records than most men during her lifetime. She was the first woman to break the sound barrier.

I enjoyed writing about the Aluminum Trail over the Himalayan Mountains in World War II. I was able to find Clayton Khules and his organization, MIA Recoveries, which searches for lost planes and missing crew members on the long stretch from India to China. The stories of search and recovery were moving.

Chick Mars Quinn, wife of a missing Hump pilot, went on a search for how her husband died and ended up doing research for over a decade. She documented what happened to many lost Hump pilots through government documents and interviews. She complied her findings in a book called “The Aluminum Trail.”

My favorite story of all was about Larry Zellers, a Methodist missionary to South Korea who was captured on the first day of the invasion by North Korea into South Korea. He was a prisoner the entire war. Later he helped implement an Air Force creed by which POWs can survive being captured by the enemy.

Many stories are so special to me and have impacted my life in one way or another. I appreciate so much your comments and the information you have shared with me about events that were important to you. Thanks for following my column.

The Museum of Aviation is a wonderful place, a free place, to see and hear about the aircraft and people that have changed our country. It is pretty awesome.

Marilyn N. Windham is a volunteer at the Museum of Aviation and a former American History teacher. She can be reached at mnwindham@aol.com. 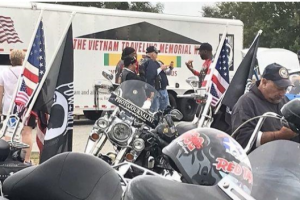