WARNER ROBINS — Museum of Aviation restoration specialists are putting back together an F-100D Super Sabre airplane that was flown by retired U.S. Air Force Maj. Gen. Rick Goddard in combat during the Vietnam War.

Goddard, who headed the Warner Robins Air Logistics Center from 1997-2000, was on hand Friday to watch as the wings were attached to the fuselage.

Goddard completed 180 missions in the airplane while flying with the 309th Tactical Fighter Squadron out of Tuy Hoa Air Base in Vietnam from September 1968 to October 1969.
“This is a very special airplane,” Goddard said. “I mean, you don’t fly an airplane in combat for that many missions without having a very close relationship with it.

“It brought me home many times when it probably shouldn’t have. I mean, I abused it — too many G’s, hard rolls, things like that, in order to either get the mission done, get the bombs on target, or the guns in place, or just to save my own life,” he said.

The airplane was located on an outdoor display at the Otis Air National Guard Base in Massachusetts and was brought back to the museum in Warner Robins in 2010. Remaining work includes the addition of the tail section, engine and landing gear.

The airplane is expected to be displayed in the aviation museum’s Hangar One, home to several Vietnam-era aircraft exhibits. That could happen as early as July but may be delayed a few months if the airplane is included in an air show in October, Goddard said.

“The most important thing is for people to understand that this is a mechanism of war,” Goddard said. “It’s designed for war, and it accomplished that mission extremely well.

The Museum of Aviation is located near Robins off Ga. 247. It’s open 9 a.m.-5 p.m. daily. On Christmas Eve and New Year’s Eve it closes at 1 p.m. and is closed on Easter, Thanksgiving, Christmas and New Year’s Day.
To contact writer Becky Purser, call 256-9559, or find her on Twitter@becpurser.

All the Way Home 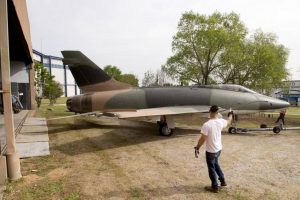 After years of restoration, battle-tested jet put on display at the Museum of Aviation 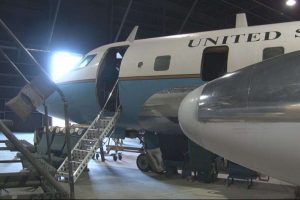